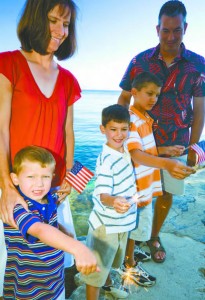 Using fireworks on the 4th of July is an American Tradition.  And it can be safe if a few common sense rules are followed, says Ralph Apel, the spokesperson for the National Council on Fireworks Safety. Consumer fireworks go through vigorous third party testing in China before being shipped to the United States.  But he notes, according to the U.S. Consumer Product Safety Commission (“CPSC”), there were an estimated 9,600 fireworks related injuries during the Fourth of July season in 2011.  Most of these injuries would not have occurred if the fireworks had been used under close adult supervision and if some basic safety steps had been taken. The National Council on Fireworks Safety offers these common sense safety tips for using consumer fireworks in hopes that injuries to consumers can be greatly reduced this season:

• Buy your fireworks from reputable retailers.

• Have a designated shooter to organize and shoot your family show.

• Alcohol and fireworks do not mix. Save your alcohol for after the show.

• Parents and caretakers should always closely supervise teens if they are using fireworks.

• Parents should not allow young children to handle or use fireworks.

• Fireworks should only be used outdoors.

• Always have water ready if you are shooting fireworks.

• Obey local laws. If fireworks are not legal where you live, do not use them.

• Never relight a “dud” firework.  Wait 20 minutes and then soak it in a bucket of water.

• Soak spent fireworks with water before placing them in an outdoor garbage can.

• Never attempt to alter or modify consumer fireworks and use them only in the manner in which they were intended.

• Report illegal explosives, like M-80s and quarter sticks, to the fire or police department.

Share
Previous What Your Body Language Says About You
Next What is an Herbal Poultice?