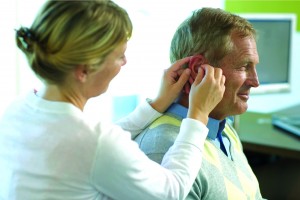 Hearing loss has been shown to be associated with a number of different health problems, from diabetes to cardiovascular problems. This really makes hearing loss a window into your overall health. Audiologists and other hearing health professionals have long believed that there is also a connection between hearing loss and cognitive decline. Due to a new study that was recently published in the Journal of the American Geriatrics Society, there is now strong evidence to support this idea.

The study, “Self-Reported Hearing Loss, Hearing Aids, and Cognitive Decline in Elderly Adults: A 25-year Study,” was published in the October 2015 edition of the journal. It was found that the use of hearing aids actually reduces the risk of cognitive decline in adults with hearing loss. The trajectories of cognitive decline among an older group of adults using hearing aids and an older group of adults with hearing loss who did not use hearing aids were compared. A group of individuals who had no reported hearing loss was used as a control. The study followed 3,670 adults who were 65 years or older for a 25-year period. The participants were given a questionnaire to assess their hearing loss, and cognitive decline was measured using the Mini Mental State Examination (MMSE).

The information this study provides is truly invaluable. No study has ever before found that those with hearing loss who use hearing aids have similar rates of cognitive decline as individuals with no hearing loss. The results show us the importance of diagnosing and treating hearing loss, as well as the consequences of ignoring hearing problems. Hearing health care providers should be sure to discuss with their patients the ways that hearing aids can provide benefit in all aspects of their heath — brain health included.

Dana Luzon, Au. D. , CCC-A, FAA, Doctor of Audiology
Originally from Southern NJ, Dana Luzon
received her undergraduate degree in Speech Pathology and Audiology from the Richard Stockton College of NJ, and continued on to receive her Doctorate of Audiology at Salus University’s residential program. Her varied clinical experiences throughout her doctoral studies include: VA hospitals, rehabilitation clinics, ENT and private practice settings. Her professional interests include: audiologic rehabilitation and progressive tinnitus devices. Her interests in the field outside of the clinic include: Humanitarian Audiology, and Audiology Awareness. Dr. Luzon currently lives in West Palm Beach, FL.