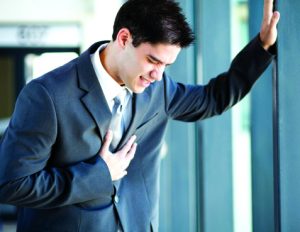 Look for a new noninvasive technology in your Primary Care Physician’s office that can accurately predict your risk of heart disease by age 30.

Area Primary Care Physicians are just learning of new technology aiding them in identifying and providing early intervention for those at increased of heart disease. And the response is tremendous. This new technology allows physicians to identify individuals at increased risk of heart disease as early as 30 years old, long before currently available screening tests can detect. This new insight, into the actual artery function, is ground breaking and will revolutionize how PCP’s screen, test, and treat all arterial diseases including Coronary (heart), Cerebrovascular (stroke) and Peripheral arterial disease.

The underlying cause of a heart attack is Coronary Artery Disease (CAD). CAD is the leading cause of death of all individual over the age of 65 in the United States. The US population is approximately 320 million. Every year about 2 million people in the US die from ALL causes; of those deaths, OVER 1 million are due to this arterial disease – Atherosclerosis and its effects (heart attack, stroke, or peripheral artery disease). The numbers are staggering. This disease is responsible for over ½ of all deaths in the US annually.

This epidemic has become the focus of many medical professionals, from blood lipid screenings, stress tests, MRI’s, CT scans, Thallium Scans, PET scans to Coronary Angioplasty (heart cath). However, all of these tests are costly, some invasive and none allow us to see effectively what is happening to the structure of the artery wall itself – the most predictive element leading to a heart attack or stroke.

Researchers have clearly identified changes in the artery wall can be detected post-mortem by at least age 30. Until now we have had no screening device that will allow us to identify these individuals who are at increased risk for heart attack or stroke. Such an early identification would allow medical professionals to intervene at a time where a real difference can be made, before the disease has progressed.

In truth, most people with atherosclerosis have no symptoms. Advanced CAD may exist with minimal or no symptoms and can progress rapidly to an abrupt closure of the artery, possibly resulting in a catastrophic event. Sudden death is the first symptom of coronary heart disease in 50% of heart attack deaths. In fact, the average age of a person in a Cardiac Cath Lab, for the first time, nationwide is 55. Many of these people had no prior symptoms. If we could identify these individuals at age 30 – preventative measures could be taken so that a heart attack or stroke is avoided. A medical pioneer and inventor has done just that.

If you are in the medical community you have likely heard of Dr. Jeffrey Raines or one of his contributions to the world of medicine and diagnostics. Dr. Raines invented the Pulse Volume Recorder (PVR) in the early 1970’s, which he sold to Life Sciences, Inc. This machine remains the 2nd most used device in diagnosing and monitoring Peripheral Vascular Disease to date, you can find it in hospitals throughout the world. Dr. Raines is also responsible for Intraoperative Autotransfusion used by trauma surgeons worldwide and contributed to the development of B-mode Ultrasound. His latest invention has been 42 years in the making. The Soteria Cardiac Platform was cleared by the FDA in 2014 after rigorous testing and certifications. It has received an A++ rating and is now available for distribution in the US.

The Soteria Cardiac Platform is a noninvasive diagnostic test that measures arterial compliance. Arterial Compliance is simply the artery’s ability to expand and contract (much like a balloon) as a function of the body’s systemic blood pressure and demand for oxygenated blood increases and decreases. This elasticity is vital to a working vascular system. Decreased arterial elasticity is caused by thickening of the artery wall secondary to the presence of plaque build-up in the artery wall (Arteriosclerosis/Atherosclerosis). This technology is also effective in monitoring those who have experienced arterial disease by identifying changes or stability of the disease during and following treatment.

The Soteria Cardiac Platform is completely noninvasive. It uses three blood pressure cuffs attached to the upper arm, thigh, and calf, to produce a series of measurements and mathematical computations that gauge the elasticity/compliance of the thigh and calf level artery walls. Arterial compliance, is the local arteries’ change in volume divided by its change in internal pressure as blood moves through. An artery with low compliance is stiff, and allows very little change in volume as blood pumps through. The more atherosclerosis an artery has, the more plaque and thickening it contains, and the lower its compliance. “The result is a measurement of generalized arterial elasticity which has a direct correlation with degree of atherosclerosis and cardiovascular risk,” said Raines. The test only takes about 10 minutes, and can be administered by a medical assistant.

The result is a detailed report of the patient’s risk of heart disease, stroke or peripheral vascular disease, which includes a Soterogram Score, compared to normal values compiled from clinical studies conducted through the National Institutes of Health and FDA. The report includes whether obstructions and wall disease are absent, mild, moderate or severe, and in the case of peripheral arterial disease identifies precisely where blockages are located. The Soterogram shows the person’s actual age, their arterial age, and their level of atherosclerosis.

Currently the most used test to detect cardiac risk is the stress ECG and echocardiogram combination. It is expensive and research has shown not effective in measuring atherosclerosis and cardiovascular risk. In contract the Soteria Cardiac Platform cost only $200 and is covered by most insurers.

This is truly a win – win for the public and the Primary Care Physician. The patient will have the opportunity to receive the screening in their PCP’s office on an annual basis, or more regularly if indicated due to increased risk. The PCP will have the opportunity to receive the technology and training on the testing equiptment at no cost. Currently the Soteria Cardiac Platform is being used in 30 South Florida medical offices. This is expected to quickly expand as the company is now prepared for mass distribution. If your medical office is interested in learning more about the Soteria Cardiac Platform, or if you as a patient would like to find an office currently offering this test please call 305-595-4447,

Dr. Jeffrey Kent Raines
Dr. Jeffrey K. Raines, CEO, Founder and Chief Technical/Medical Officer, was responsible for the Soteria Cardiac Platform including its design and module development. Dr. Raines holds a BS Mechanical Engineering from Clemson University and a Master’s in Mechanical Engineering from the University of Florida. After attending Harvard Medical School and training in the Surgery Department of Massachusetts General Hospital, Dr. Raines received a PhD in Engineering from MIT. His thesis title was Diagnosis and Analysis of Arteriosclerosis in the Lower Limbs from the Arterial Pressure Pulse; this work outlined the construction and testing of a new medical device called the Pulse Volume Recorder (“PVR”). This device was built and distributed by Life Sciences, Inc. and became a central device in the diagnosis of peripheral vascular disease and in the development of vascular diagnostic laboratories around the world. In 1972, the device was formally introduced via a presentation at the Society for Vascular Surgery and its publication in the Journal of Surgery. To this day, with the initial design intact, this device remains the second most common physiologic vascular laboratory test ordered for arterial disease worldwide. Dr. Raines received royalties over 17 years which aggregated in excess of $20 MM and tests using the machinery generated revenue exceeding $1.7 Billion per Year over the

17-year period. Dr. Raines was Chief of Research at the University of Miami Department of Surgery until his retirement in 2004 and Director of the Miami Vein Center from 2004 to 2010. Dr. Raines has developed Soteria’s technology over a period of 43 years and now that it has FDA clearance, he looks forward to expanding the use of the Platform worldwide.

Dr. Raines developed B-mode ultrasound imaging with Dr. William Glenn and performed the world’s first B-mode image. Dr. Raines is also responsible for developing intraoperative auto-transfusion which is now used worldwide in trauma surgery. Dr. Raines is Emeritus Professor of Surgery at Harvard Medical School and the University of Miami. Dr. Raines is a Senior Member of the Society of Vascular Surgery, was elected to American College of Cardiology in 1975 and the Harvard Surgical Society in 2006.

Dr. Raines lives in Homestead, Florida with Glo, his wife of many years; they have four children and five grandchildren.