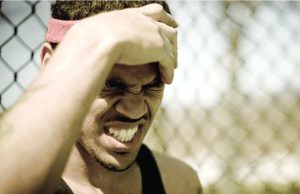 Head injuries continue to be a hot topic in sports medicine and sports media. The 2015-2016 NFL season has seen a staggering 166 concussions take place during games.

For most people, the symptoms of a concussion will fade within 7 days. The brain will make generally recover within 10 days on average. These patients will likely return to normal activity without any obvious ill effect from the head injury.

However, 10-20% of concussed patients will have persistent symptoms for over 30 days leading to a diagnosis of post-concussion syndrome.

Basically, if you have any of these symptoms after hitting your head, you’ll likely get a diagnosis of post-concussion syndrome:

These symptoms are subjective in nature and they have a wide range of causes, and because post-concussion syndrome has no reliable test, we have to rely on a patient’s own report to document their improvement. This leads some doctors to say that post-concussion syndrome may be more of a psychological illness or an illness that people are faking in order to increase the payment in a lawsuit.

I think that line of thinking is a disservice to patients with head injury. I think the best way to combat this is through a change in perspective about post-concussion syndrome.

When you think about concussion, you likely think about the physical damage that occurs in the outer covering of the brain called the cerebral cortex. This is the area that is directly damaged or “bruised” during a concussive injury.

The cortex is the wrinkly part of the brain that is primarily responsible for planning, hearing, seeing, and conscious thought.

However, the cerebral cortex isn’t the only thing that’s damaged in a head injury. Millions have gone into brain research after a concussion, but there’s been little to show for the treatment of these patients.

When we only think about physical damage in the brain, patients can be left in the dark when their brain scans and blood tests look normal.

The authors of this study have suggested that we have to look beyond cortical damage, but have suggested that 2 alternative areas in the body can be injured and treated after a concussion. These are the vestibulo-ocular system and the craniocervical region.
Concussions affect the brain, spine, ears, and eyes.

As a result of this, it’s been suggested that people with post-concussion syndrome be be classified into 3 main types:

1. Physiologic concussion – symptoms as a result of an energy imbalance in the brain

2. Vestibulo-ocular – symptoms from a malfunctioning balance and vision system

Recovery Relies
on the Right Treatment
Historically speaking, doctors have taken a “watchful waiting” approach to treating post-concussion syndrome. If post-concussion symptoms were just a result of a shaken brain, then patiently resting the brain and waiting for it to heal was the strategy of choice.
Research in the past 2 years is changing the way we think about and treat concussed patients. We’re actually seeing that too much rest can be counter-productive to recovery. Researchers are showing that movement and activity is an important driver of brain activity and brain adaptation. Things like physical therapy and vestibular rehabilitation are now known and widely prescribed interventions can do wonders to help the vestibulo-ocular system of a concussed individual.

Concussions have been shown to occur with accelerations ranging between 60 and 160 g’s of force with 96 g’s being highly predictive of concussion. In contrast, whiplash studies have shown that as little as 4.5 g’s can cause whiplash injury or mild neck strain. That means that an injury to the head will almost certainly cause injury to the neck!

This is one of the main reasons we see so many patients with post-concussion syndrome in our office. Many times, these patients have already been through a course of vestibular rehabilitation but experienced just minimal improvement. These patients had an injury at the junction where the head meets the neck called Atlas.

Within weeks of getting the atlas corrected, patients will start to notice improvements in post-traumatic headache, post-traumatic vertigo, and many even recover some of their ability to focus.

As of now, only a handful of case studies exist to support this, but upper cervical chiropractors see this type of thing happen over and over again.

If you are continuing to suffer with symptoms for months after a concussion, it’s probably time to take a good look at your neck.

Insert Byline here. Byline should add that I speak on sports related concussion and head injury at conferences around the country.

Share
Previous Healthy Holidays To You
Next Holiday Stress and Weight Gain: The combination most dreaded by Americans can be avoided with a few simple steps