Since 2010, there has been plenty of, sometimes confusing, news about the Affordable Care Act (“Obamacare”), a complex piece of legislation to say the least. However, few seniors know how they will be affected. In the last election, 73 percent of seniors considered this to be a major issue. This is the largest piece of legislation to affect the Medicare structure since the enactment in 1965, which also had a significant impact and its share of controversy at the time.

As you watch the news every night and see stories about the problems with the health insurance exchanges in “The Market Place,” relax. This doesn’t apply to those over age 65.  The Affordable Care Act (ACA) will actually attempt to give seniors more control over their health care.

However, currently this is what seniors can expect:
• New Medicare enrollees get a no-cost “Welcome to Medicare” wellness visit with their doctor. It is not a complete physical, but rather a conversation about your medical history and about steps that can be taken to maintain your health. In addition, the doctor is supposed to discuss your legal advance directives. It has been said that more than 82 percent of seniors in this country have not addressed these issues.  This applies to Medicare and Medicare Advantage (Part C) enrollees.  Education is the key here.

• Certain preventive services, like mammograms or colonoscopies, will be covered and you won’t have to pay any coinsurance or deductible under Medicare (about 15 services).

• The Medicare Part D “donut hole” for your prescription drug coverage will be eliminated by 2020. If you spend enough on prescriptions to reach the donut hole (where you begin to pay out-of-pocket), you will begin to receive a 50 percent discount on brand-name prescription drugs. You should receive the discount automatically at your pharmacy without action on your part. In 2013 the donut hole was between $2,970 and $4,750. In 2014, expect a 4.6 percent decrease.

• Some funding will be provided to promote home- and community-based long term care options to allow seniors to age in place.

• Funding will be provided to implement the Elder Justice Act to help prevent and eliminate elder abuse, neglect and exploitation. In addition, regulations will be put in place to improve the quality of care in nursing homes, including a nationwide program for background checks.

Medicare was originally predicted to be bankrupt by 2016; the new provisions will extend this date to 2024. Essentially, the ACA slows down the spending growth rate. As baby-boomers age, 11,000 people are turning 65 each day, a significant burden to the Medicare system. Couple this with a reduction in population, fewer children born and the concurrent decline in the work force contributing to the fund, and one can see why reform was needed. According to the Kaiser Family Foundation, Medicare spending was expected to grow at an average annual rate of 6.8 percent between 2010 and 2019. With the ACA savings, the growth rate will be slowed to 5.5 percent annually and will be held steady with further reductions if needed. The anticipated $716 billion in savings over this period will be derived from:

The new Independent Payment Advisory Board (IPAB) made up of 15 medical experts appointed by the President and approved by the Senate will oversee the ACA. The Board will be prohibited by law from increasing revenues or co-pays, changing eligibility or altering benefits. Given the current political climate, this could all be problematic.

The downside of all of this is that many of the spending reductions will directly impact Medicare providers. Physicians are facing a significant reimbursement reduction beginning in January 2014. This might lead to a significant reduction in providers willing to provide care for Medicare patients at a time when the population is aging at a record rate; a potential tsunami on the horizon.  That discussion is currently being heard at the American Medical Association, and Americans will have to stay tuned.

To summarize, the ACA provides new benefits (preventative care) and corrects some deficiencies in existing laws (the “donut hole”).  The ACA also implements new taxes to extend the solvency of Medicare while providing new restrictions on future spending and program efficiency. Note that this discussion concerns traditional Medicare. If you have an Advantage Plan (Part C), you may still be forced to the market place or at the very least, be sure to review plan changes carefully. For the most up-to-date information, refer to www.MyMedicare.gov for the e-handbook.

Donna Holm, CPA, MST is an Associate with Harless & Associates. 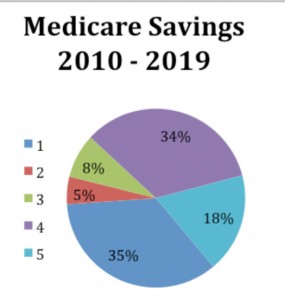 Share
Previous Tired of Pain? Tried Everything? New technology offers impressive relief
Next Turn Back the Clock with No DownTime