Neck pain is a common occurrence in normal day life, now there is a solution! 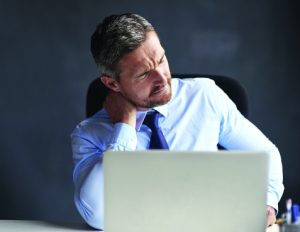 A practicing dentist for 35 years in New York, Robert Herbsman is now retired and living in Juno Beach. The constant bending over to work on patients’ teeth while seated in his dental chair left him with severe head and neck pain.

“The pain in my head would go down through the back of my skull and push into the temporal areas,” Robert recalls. “The pain would come and go, but when it did occur, I would say it was a ten on a scale of one to ten. It was almost debilitating. And I couldn’t take an aspirin and expect it to go away. It wasn’t that kind of headache.”

Robert went to see more than one neurologist and underwent numerous MRIs and CT scans attempting to pinpoint the problem.

“Not one of them could give me a definitive answer as to what was going on,” he recalls. “It was extremely frustrating for me. I tried acupuncture, injections and chiropractic. Nothing worked long term. It was always a temporary fix. I grew so frustrated I just decided to give up for a while.”

An avid outdoorsman, Robert enjoys kayaking, the beach and cycling long distances. He eventually became physically unable to continue with those favorite activities.

“I lost my zest for life when I got to a point where I had to stop doing the things I loved because of the constant pain,” he explains. “You fall into a depression when that happens. I did not want to continue like that.”
One day while lounging at his community pool, Robert received some unsolicited advice from a neighbor.

“My neighbor is a massage therapist at Active Health Center, she thought perhaps the problem was muscle related, so she suggested I come in for some massages, which I did,” he shares. “It helped tremendously, and over time she suggested I see one of the doctors there and try their MCU machine.”

The MCU, or Multi-Cervical Unit, works to isolate and strengthen weak muscles in the neck.

Robert took heed of his neighbor’s advice and made an appointment to see Colin O. Behrue, DC, at Active Health Center.

An accurate diagnosis
During his initial consultation, Dr. Behrue determined that Robert had degenerative discs in his neck, bone spurs and arthritis.

“As a dentist for so many years, he tended to use one side of his body while treating patients, so he was leaning a lot to one side, and he had his neck bent all the time. As a result of that repetitive motion, a lot of damage incurred in the cervical area,” Dr. Behrue describes.

Robert’s treatment plan began with chiropractic care to regain his range of motion.

“He started with gentle, very specific chiropractic care,” Dr. Behrue shares. “Once Robert was able to turn his neck again without constant pain, such as when he is driving a car, we then moved forward with light physical therapy in order to train his muscles and his body to recognize what his ‘new normal’ is.”

Robert’s treatments with the MCU began shortly thereafter. The treatments are specifically designed for each individual to strengthen his/her neck muscles in the identified areas of weakness.

Finding the missing piece
“Doctors need to know about the MCU,” states Marc Weinberg, DC, “because the research is there. Until the MCU came along, there was no technology to objectively measure and treat neck weakness.”

He explains that the MCU is both diagnostic and therapeutic, once an individual has been tested, the treatment is relatively easy. “When we do the testing, the patient goes through a series of isometric strength exercises. They don’t have to move, but the machine records sixteen different ranges of motion. Once we use the testing functions of the MCU to find the source of weakness, the machine goes to work to fix the problem.”

According to Dr. Weinberg, research indicates the MCU is the absolute best way to strengthen the neck. It’s the missing piece of traditional neck pain care, and a must to treat neck weakness.

“Starting in the 1990s, a fair amount of research came out. The research showed that neck weakness leads to neck pain, and you need to address the neck weakness first in order to treat the pain,” explains Dr. Weinberg. “If someone gets into a car accident, or has ongoing repetitive motion, micro-trauma (from keeping their head down all the time, like Robert) they start off with some neck discomfort. The muscles become inhibited, and that weakness leads to more pain, which leads to further weakness: It’s a vicious cycle.

“We see patients coming in with many different symptoms – pain, headaches, numbness, tingling – but oftentimes these other factors can be stabilized just from strengthening the neck,” Dr. Weinberg explains.

The average treatment regimen is nine weeks, but people typically begin to see results in just three to five weeks.

“It’s completely painless, easy to use, and we constantly monitor every patient,” adds Dr. Behrue.

Dr. Weinberg notes that the MCU is not the sole treatment used, but rather a key component of a customized treatment plan.
“Many of our patients, like Robert, receive hands-on care with our physical therapist in conjunction with the MCU treatment, but the MCU is the missing piece of the neck pain puzzle.”

Robert says he has returned to enjoying his favorite outdoor activities once again.

“I can paddle my kayak and pedal for miles on my bike, and I feel great. Better than I ever have. Dr. Behrue is very knowledgeable and has a lot of compassion for his patients. I consider myself to be the lucky one! I’m glad I found them!”

If you or someone you love is suffering from neck pain or recurrent headaches,
give the staff at Active Health Center a call and see of the MCU is right for you.