Are you Chronically Anxious?

By Mike Cohen, Director
Center for Brain
Take a moment to answer these questions: 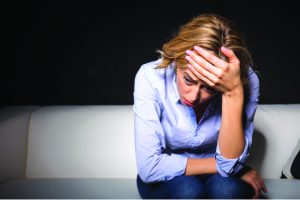 If you said “yes” to two or more of these questions you probably have anxiety – and you also probably already know it, especially if you’ve been plagued by these symptoms for six months or more.
Maybe you’ve tried medications and they didn’t help much, or you don’t want to take drugs.
For someone like you there is a solution called neurofeedback – and it doesn’t involve drugs.
Why Can’t I Talk Myself out of my Anxiety?
People who don’t understand anxiety may tell you to calm down and not let things bother you. You may even tell yourself that, but if it were that easy you’d already be doing it!
Anxiety and fear are a normal state of mind when there’s a true threat or danger. For most people, when the danger has passed, the mind goes back into a calm state.
People prone to anxiety have often suffered trauma either as a child or as an adult which wasn’t addressed and worked through with therapy, impacting their feelings of safety. The brains of people subject to chronic anxiety get “stuck on high alert,” making it difficult to go about daily life. No amount of logic changes how you feel. How can you concentrate, trust people or have normal interactions when your brain is telling you that your life or well-being may be at risk?
What is neurofeedback?
Neurofeedback is one of the most powerful technologies in the world for reducing anxiety and panic attacks. It helps the brain get “unstuck” from high gear and operate the way it should when going about day-to-day living.
Neurofeedback takes advantage of “neuroplasticity,” the brain’s ability to change itself. It teaches the brain another way to respond to stimuli like everyday triggers. A computer analyzes the brainwaves, then “talks back” to the brain using customized sounds and images. This feedback encourages positive brain activity such as relaxation, focus and attention and discourages the type of brain activity which causes anxiety. With repeated training the brain learns to slip more easily back into a state of calm.
Do I have to do
neurofeedback indefinitely?
No. The number of sessions varies depending on the individual, but 25-30 sessions are sufficient for many people to have retrained their brain for long-term improvement.
Does neurofeedback do the same thing that medication does?
In some ways, yes, but in one important way, no.
Both neurofeedback and medication calm the brain. The difference is that medication doesn’t have any permanent impact on brain function. Once the medication wears off, you’re right back where you started.
Neurofeedback, on the other hand, teaches the brain a different way to handle the stimuli of life, reducing its tendency to overreact to the situations encountered in day-to-day life. Many of our clients have been able to reduce or eliminate anxiety medications.
Client Success Stories
Cecily, 52, had suffered from anxiety and depression since her late 20s following a serious car accident. Medications helped at first but eventually did not. Doctors ran out of ways to help her, and her anxiety surged.
Cecily became increasingly fearful. She stopped participating in normal activities and felt completely overwhelmed. An intensive and comprehensive intervention of neurofeedback and other therapies at Center for Brain, along with an adjustment of her hormones, and acupuncture, broke her cycle of anxiety and depression. Today she is sleeping without medication and living a calm and peaceful life.
Brett, 24, had become so paralyzed by panic attacks that he had been unable to work or drive for two years. He was on heavy-duty mood stabilizers, an antipsychotic medication and other drugs. The medications helped somewhat but not enough for him to function.
After one month of neurofeedback sessions 3-4 times per week his panic attacks and extreme anxiety diminished, and he was able to drive again. Now that he knows how to calm himself he reports feeling “completely normal.”
Melissa, 47, had anxiety so severe that she was unable to drive, couldn’t pay attention to anything and was afraid to leave her house. She took numerous medications for anxiety and sleep but did not improve. By the time Melissa came to Center for Brain, she had been suffering extreme anxiety for a solid year with very little relief.
After a month of neurofeedback, Melissa began feeling much calmer and was sleeping better. She started leaving the house and was even able to get and keep a job. Following three months of treatment Melissa appeared in our office bright, cheerful, and engaging, without any anxiety symptoms.
Center for Brain is located at:
550 Heritage Drive, Suite 140
Jupiter, FL 33458
561.744.7616
www.CenterforBrain.com
Michael Cohen, Director Center for Brain
Mike Cohen is a leading expert in brain biofeedback. For over 20 years, he’s worked with clients, taught courses and provided consulting to MD’s and mental health professionals around the world, helping them incorporate into their practices new biofeedback technologies for chronic pain, anxiety and mood disorders, ADHD and neurological problems.

Share
Previous Are Hormones Driving You Mad?
Next HELP YOUR DIABETES®