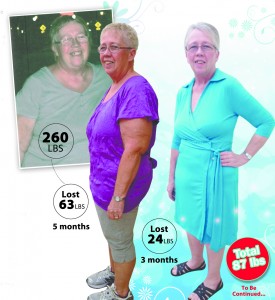 Menopause is an inevitable part of a woman’s life, whether brought on by necessary surgery or the natural
progression of time. The symptoms often interfere with daily living and change women in a way that interferes with positive self image and emotions. As women approach menopause they endure many symptoms, but one that proves the most difficult for many women to accept is menopausal weight gain.

Not only can a few extra pounds (or maybe more) ravage a woman’s self-esteem and self-image, but weight gain can usher in a host of health concerns that put a woman at risk of developing life-threatening conditions. These include:

What is Menopause?
Menopause is a transitional period marking the cessation of ovulation in a woman’s body. This time of change may last a few months to several years. Symptoms vary from mild to severe, and are brought on as our bodies try to adapt to decreasing amounts of estrogen. Symptoms include hot flashes, night sweats, insomnia, fatigue, mood swings, memory loss, vaginal dryness, headaches, joint pain, and weight gain.

About 90% of menopausal women experience some amount of weight gain. Although weight gain is a natural and common aspect of getting older, there are ways to reduce it. Women who are educated about this symptom are more likely to find ways around the typical spare-tire waist or extra inches here and there. On average, women gain between 12 and 15 pounds between the ages of 45 and 55, the stage in life when menopause typically occurs. This extra weight generally does not evenly distribute itself throughout a woman’s body. The weight tends instead to accumulate around the abdomen, and women often notice the shape of their bodies slowly lose their hour-glass figure and begin to take on a rounded shape.

Diagnosis and Treatment of Menopause
Few areas of women’s health stir up as much debate as Hormone Replacement Therapy (HRT), which is normally started when the first symptoms of menopause appear. While they may alleviate hot flashes and prevent osteoporosis, they will also increase the risk of breast, ovarian and uterine cancer, and have a number of significant side-effects. But HRT isn’t the only solution. Menopause is an area in which Chinese Medicine shines. Acupuncture and Chinese herbal medicine have the ability to detect energetic changes that occur in the body and quickly relieve symptoms such as hot flashes, foggy mind, irritability and weight gain.

Evidence that Acupuncture and Herbal Medicine have been used for women’s health can be found in early medical literature dating back to 3 AD.

Studies on Acupuncture and Menopause
Since the early seventies, studies around the globe have suggested that acupuncture and Chinese herbal medicine are effective treatments for hot flashes, anxiety, insomnia, vaginal dryness and many other symptoms associated with menopause. Recent studies show extremely positive results.

From 1997 to 1999, one of the first studies in the United States to explore the effectiveness of acupuncture in alleviating hot flashes, insomnia and nervousness was conducted by Dr. Susan Cohen, D.S.N., APRN, associate professor of the University of Pittsburgh. It was found that during the course of acupuncture treatments, hot flashes decreased by 35% and insomnia decreased by 50%. A follow-up study revealed hot flashes significantly decreased in those receiving acupuncture, compared to those receiving routine care.

In a research review published in 2009, scientists analyzed 31 studies (with a total of 3,013 participants) and found that acupuncture was associated with a significant reduction of average body weight and improvement in obesity.

While these results are promising and the United Nations World Health Organization has approved acupuncture as a treatment for symptoms associated with menopause, further clinical trials with larger samples are currently underway.

A drop in estrogen and progesterone can increase a woman’s appetite and cause her to eat up to 67% more, according to one study. An increase in appetite coupled with a slower metabolism with the onset of menopause can cause weight gain in women. This could, perhaps, account for the 12% jump in the number of women who are overweight in midlife compared to women in their 20’s and 30’s.

Dr. Meng, MD (China), AP, received her medical degree from the prestigious Shandong University in China and has also completed several advanced training courses in oriental medicine from well-respected TCM hospitals in China. She has over 18 years of experience as a doctor of Chinese medicine. She has owned and operated Meng’s Acupuncture Medical Center since 2007.

Share
Previous Breaking Through
Next Trouble Falling Asleep? Up All Night? Sleep better without drugs.