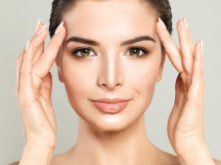 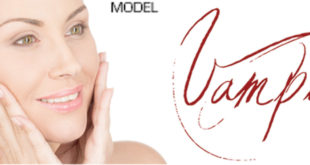 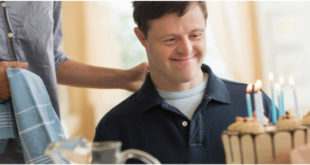 By Debra K. Brinker, RN
The cervical spine is unique, consisting of vertebrae that are smaller and more mobile than all of the movable vertebrae of the spine. This high degree of mobility is necessary in order to move the head through its varied range of motion. The cervical ligaments, stabilizing structures primarily responsible for connecting adjacent bones, are especially vulnerable when trauma occurs. When the cervical spine is stable, it moves and functions normally, while remaining in proper physiologic alignment and protecting the blood vessels, nerves and spinal cord. Injury to the ligaments changes this dynamic, and leads to instability of the cervical spine and inadequate support for the loads placed upon it, generating changes in the vertebral alignment and creating a cycle of imbalance among the vertebral joint structures. Cervical instability involves increased motion between adjacent vertebrae which causes excessive stress on the supporting ligamentous structures and the nerve endings within those structures eliciting pain and a variety of symptoms. (See Figure 1.) 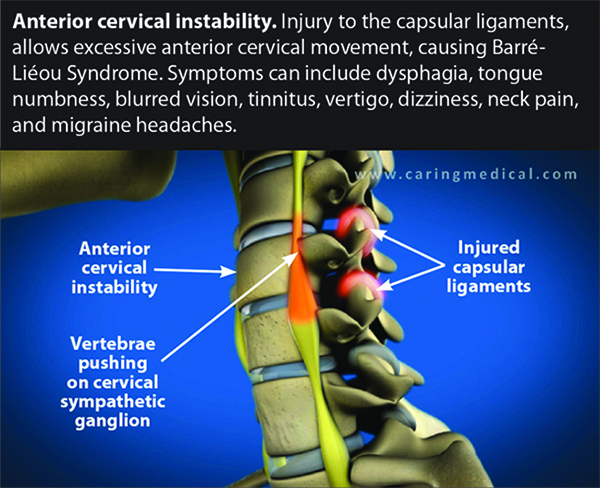 WHIPLASH: A TYPE OF CERVICAL INSTABILITY
Whiplash injuries are a common source of cervical instability. The sudden acceleration and deceleration during rear-end collisions generate severe flexion and extension of the neck, in a whip-type motion forward and backward. The backward hyperextension is often associated with more injury to the soft tissue, because it lacks the limiting effect of the chin meeting the chest in the forward “whip.” The excessive motion in hyperextension severely strains the involved muscles and ligaments, especially the anterior longitudinal ligament, and compresses the adjoining vertebral joints. (See Figure 2.) 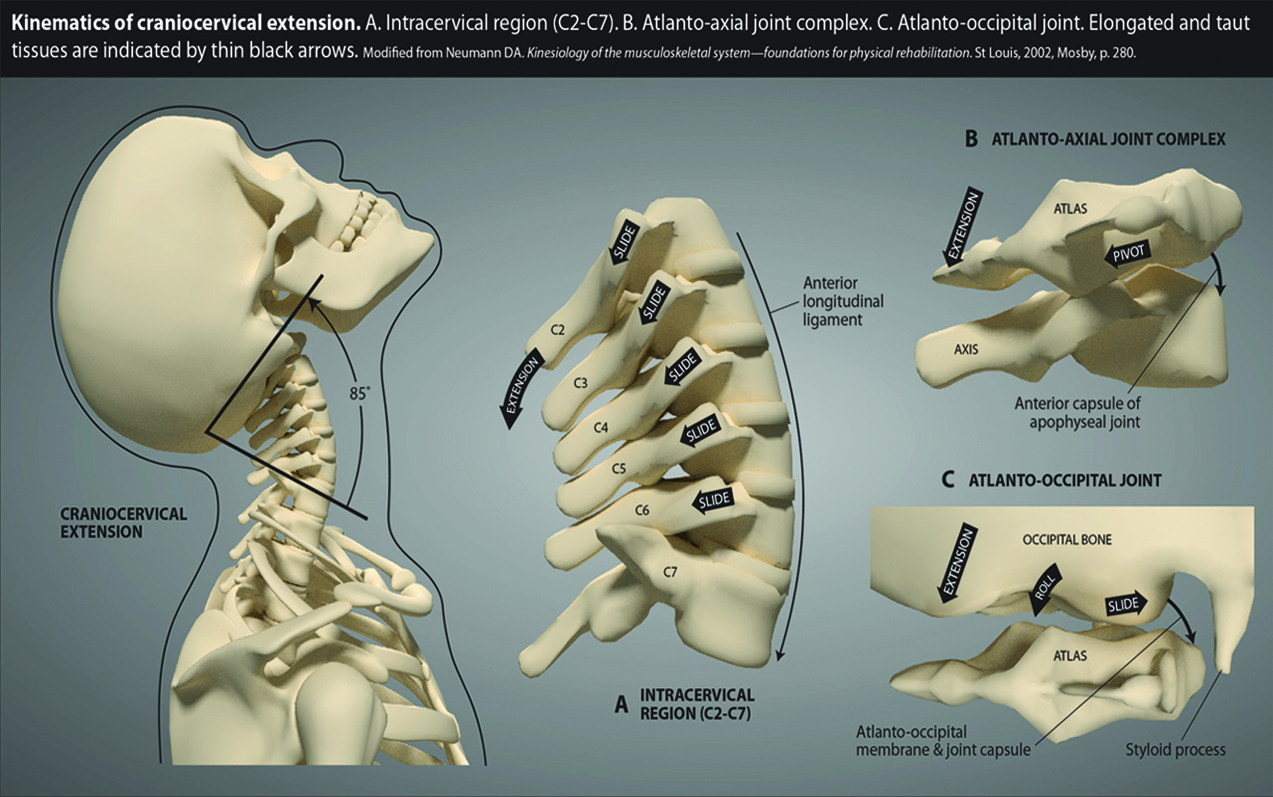 The ligaments of the cervical spine are particularly vulnerable to injury during a whiplash event and more notably when the head is rotated at the time of collision, such as looking in the rearview mirror. The lack of a stabilizing structure can lead to further injury of the soft tissue and joint structures and the possibility of nerve injury and the irritation of the sympathetic nervous system. Pain and associated symptoms can worsen in the weeks or months after an accident, as the area becomes more unstable, often leaving a person chasing the symptoms without a proper diagnosis.
CERVICAL INSTABILITY: SYMPTOMS OF A
MISSING DIAGNOSIS
Symptoms of cervical instability include neck pain, muscle tension and spasms, crepitation, and paresthesias. When the upper cervical spine (C0-C2) is involved, severe associated symptoms can involve nerve irritation, headaches/migraines, dizziness, drop attacks, vertigo, difficulty swallowing and/or speaking, and auditory and visual disturbances. Cervical instability can induce vertebrobasilar insufficiency (VBI), an alteration of vertebral arterial blood flow when the mobile vertebrae pinch off the artery, fostering an insufficiency of blood supply as it travels up to form the basilar artery which provides circulation to half the brain.  VBI may arise with intermittent vertebral artery occlusion when the head is extended or with extreme rotation. 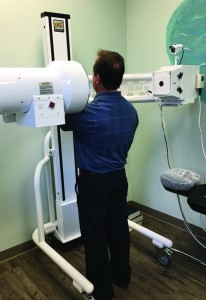 DIGITAL MOTION X-RAY (DMX): An Ideal Way to Document Cervical Instability
Digital Motion X-ray is a functional imaging tool that visualizes the bony structures and joints with video radiography while the body is in motion. (See Figure 3.) Standard imaging such as radiographs, MRI’s or CT scans that generate static images have a limited capacity to realize the pain source. The capacity to capture motion imaging, visualizing the joints as they move, allows for more accuracy in diagnosing, considering musculoskeletal pain is most commonly experienced during movement. A person with a myriad of undiagnosed symptoms months after a whiplash injury, for example, moves their head and neck through a series of motions while the DMX is videotaping. If neck and arm pain is experienced in hyperextension, the clinician can correlate these symptoms with the excessive motion of the vertebrae, misalignment, and subluxation they visualize, as well as diagnose cervical instability and associated symptoms such as radiculopathy. A cervical instability diagnosis is difficult to ascertain with static imaging, but the technology of Digital Motion X-ray makes it possible. (See Figure 4.) 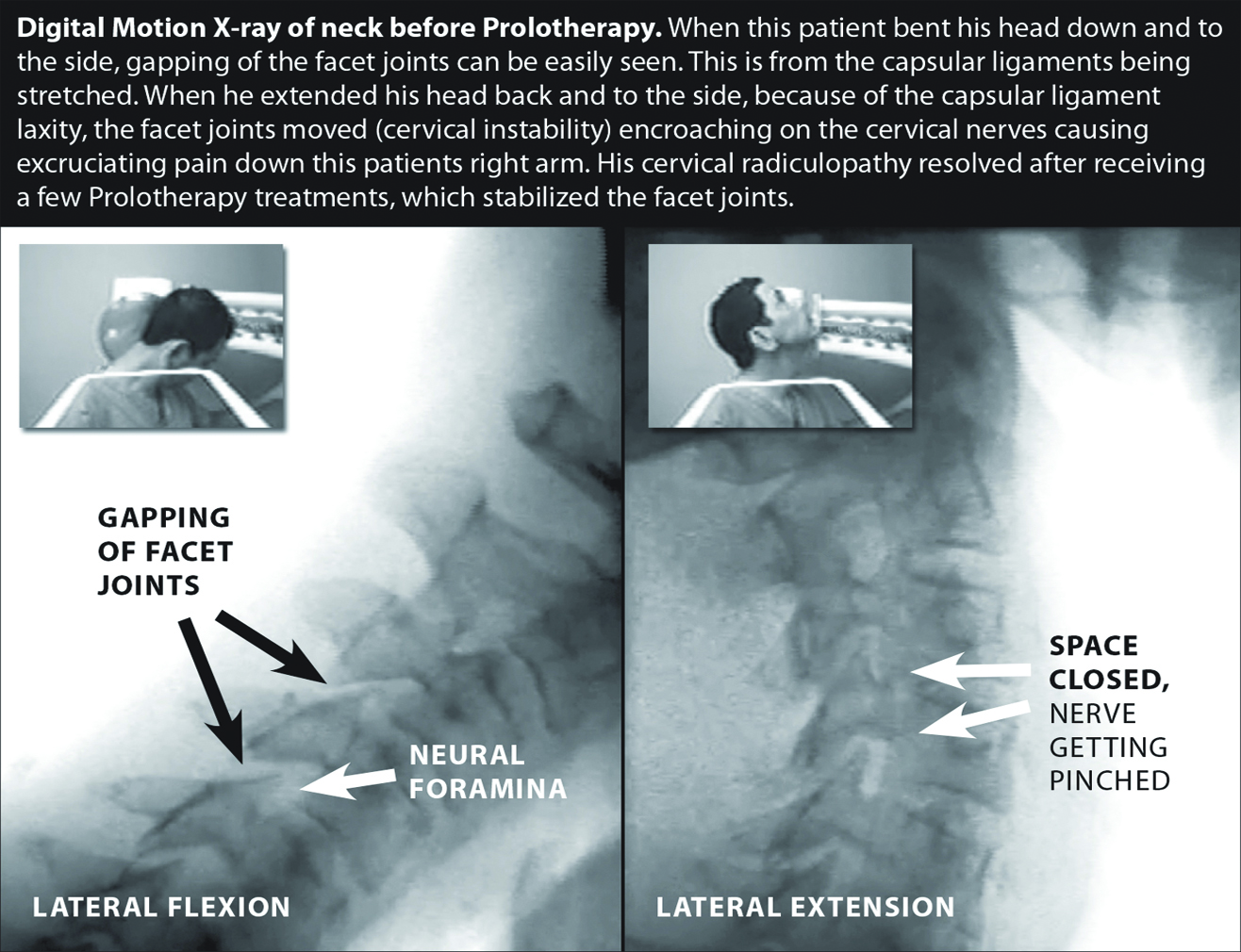 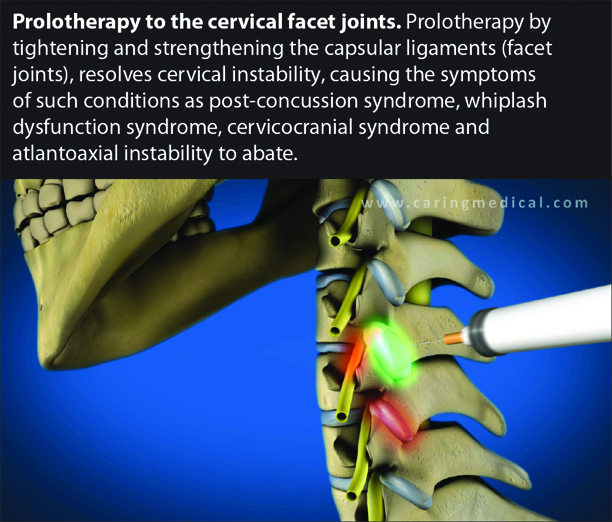 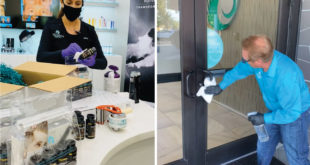