Could Stem Cells be the Next Penicillin? 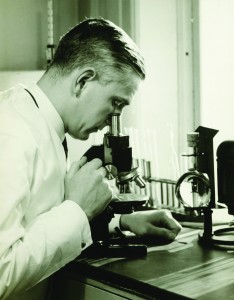 Chances are that you have heard about stem cells—they have been in the news for years. But did you know that stem cells are being used right now in the United States to treat debilitating lung diseases? Sufferers of diseases like COPD and pulmonary fibrosis are receiving life changing stem cell treatments that just a few short years ago had not yet been thought of as possible.
With further advancements in the study of stem cells, the question is posed: are stem cells the next penicillin? Stem cells and penicillin both come from humble beginnings and accidental discovery, they are both used to treat life threatening conditions and diseases and, just like penicillin, stem cell biologists have won Nobel Prizes due to the practical uses of their discoveries.
Consider the history of penicillin. Originally discovered in 1928 by the Scottish biologist, Sir Alexander Fleming, the full potential of the medication was not seen until its wide use in WWII. It wasn’t until 1945, 17 years after its discovery, that Sir Fleming received the Nobel Prize. By that time, the medication had saved millions of lives.
Stem cells have also been studied extensively over time and have crept into the national dialogue as a buzzword, particularly the stem cells found in fetuses. However, the actual stem cells that are now being used to treat diseases in the United States, and the same cells that warranted the 2012 Nobel Prize in Medicine, are adult stem cells. This type of stem cell is found in fully developed individuals and flourish in all people —regardless of age or health.
Most cells found in the body have developed into a specific type of cell, like a skin cell or a brain cell. At the turn of the 20th century, biologists discovered that some cells that reside in the body have not yet been assigned as a certain type of cell. Stem cells are simply blank cells standing by to meet your body’s needs. The use of these cells to treat diseases traces back to 1968 when the first bone marrow transplant was performed. The result of placing healthy stem cells into a sick individual’s body is the creation of healthy blood cells that are not infected with the disease. In turn, these cells replace the diseased ones and start to heal the patient.
Today, a clinic called the Lung Institute is using adult stem cells harvested from the patient’s own fat, blood or bone marrow to provide similar healing results for people with lung diseases. Their website, lunginstitute.com, states that they have treated over 1500 patients to date. The physician gives the patient a growth factor that multiplies the stem cells into millions of healthy cells and extracts the stem cells from the patient, then they separate the cells and reintroduce them into the patient’s body. The result is that the healthy cells replace the damaged ones found in the lungs. Not only can this slow the progression of the disease, but it also works to restore lung function.
Just as penicillin was recognized by the scientists that award the Nobel Prize in Medicine, so have stem cell developments. If the number of people who have already been successfully treated withstem cells is any indication of the future, then it will undoubtedly be heralded as one of the ground-breaking medical technologies of its time.
If you or a loved one suffer from a chronic lung disease, the specialists at the Lung Institute may be able to help. You can contact the Lung Institute at (800) 921-4631 or visit lunginstitute.com/health to find out if you qualify for these new treatments.

Share
Previous Are You Chronically Anxious? Wish it Could Just Stop?
Next What Is Histoplasmosis?